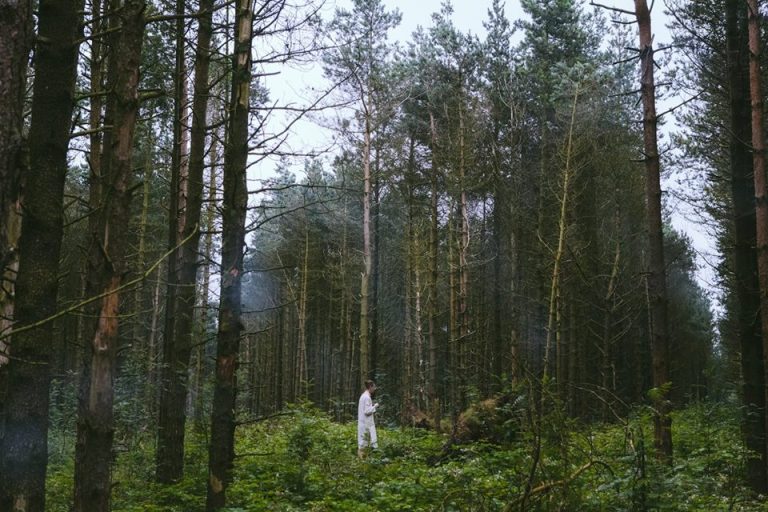 Editor’s note: I think Jim Ghedi is one of the biggest assets in Sheffield, thanks to his artistic sensibilities and the chops to pull off projects as complex as they come. It’s with great pleasure that we had our own local mad artist/genius Keith How talk with Mr. Ghedi about his current direction.

A couple of years ago, Jim Ghedi visited an open studio event at my home. Our friendship flourished fuelled by our interest in free jazz, art, poetry and improvisation. Jim invited me to paint improvisational during a Tramlines Festival gig in Sheffield. The whole idea worked so well Jim would ask me to accompany him at gigs he was playing.

The combination of transformational improvised music and painting inspired by the music was, and still is, a magical experience.

So, what is on with Jim Ghedi? A young man with the kind of talent you just cannot buy, Jim has already amassed a back catalog that most can only dream of. He is an artist who cannot sit still. It is at least eighteen months since the release of Satori, a work of genius full of jazz, poetry and huge ambition. Satori, a soul-bending emotional and spiritual trip, took a lot out of the man and after an outrageous multi-media album
launch in Sheffield’s Bank Street Gallery, he immersed himself in collaborative gigs and experiments with musicians and artists.

Last summer, Jim released an album, named Destroy All Your Earthly Possessions, a critically acclaimed instrumental album with Ghedi composing and playing everything. Live performances are something of rare beauty. He conjures up spacious atmospheric soundscapes interlaced with folk and jazz inflections.

If Ghedi sings he is able to draw on the voice of an angel and the blues of the devil such is the range of emotion he works with. Cursed with an old man’s wisdom and blessed with an innocence that is infectious, he has the ability to take his compositions into space and back leaving the listener awestruck.

Last year, Ghedi’s other love, poetry, was finding a louder voice and the subject matter of his words continued to reveal his restless spirit and disquiet with the world first revealed in Satori. In a conversation in late summer he told me then of a desire to move on and sure enough, armed with his notebook and guitar, he re-located to
Brussels.

I had four questions to ask him.

Keith How: How did you find living in a European city ?

Jim Ghedi: Living in Brussels was a very exciting place to be, lots of shit happening and lots of very open, creative lovely people. Very busy and gentle at the same time, I was busking heavily the first couple of weeks and fell in love with the local homeless community out there, I would hang out with a couple of them, I loved a guy called Michel who was convinced he was a sailor. In general though the values over there seem to be set in the right place (even though it’s a cliché thing to say it’s fucking true). In my position I met some very giving generous people over there.

K.H.: You are indicating a return to your acoustic roots is this a deliberate choice?

J.G.: Yes, very deliberate. Travelling a little grounded me to what I love and where my heart is musically. I am releasing 4 albums in 2015, all solo acoustic guitar composition, the first will be titled Rue du mont blanc and this was inspired and written in Brussels. 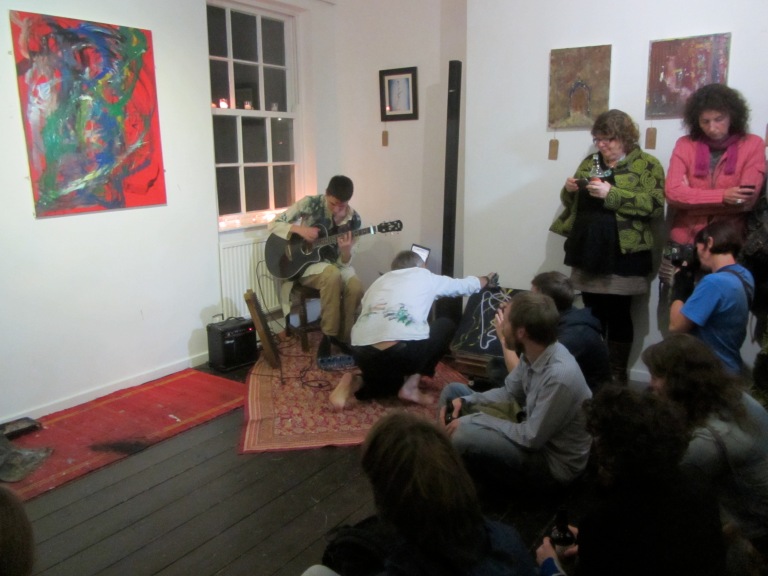 K.H.: Your career so far has covered different genres, Do feel more settled in this new direction?

J.G. Feeling very focused musically, more than ever. I am working every day on this new material, feeling very settled in what genre / style of music I do now. Determined and going to hopefully release prolifically this year.

K.H.: How do you see future of live performances for yourself ?

J.G.: Since I have been back I have been playing in people’s homes, a so called ‘living room gig‘. They have been very rewarding and successful mainly because of the intimacy and the boundaries of performer and audience being smashed to pieces! When you are drinking with a guy and discussing the twin peaks series and how fucked up the dwarf was before you play your set, it’s a lot easier to get on a level with people you’re playing to. It was nice to discuss with each other between songs and get to meet people. The aim of live performance is following this type of intimate setting with some hopefully bigger gigs in very nice large acoustic buildings.

2015 sees a new chapter opening for one of Sheffield’s finest .No doubt Jim Ghedi will allow his gypsy spirit and wanderlust to take him along the road less travelled.

Find out more about Keith How‘s projects on his website. Or follow his photographic adventures at Low Horizons.

2 thoughts on “A traveller in time and space: a profile on Sheffield’s Jim Ghedi.”