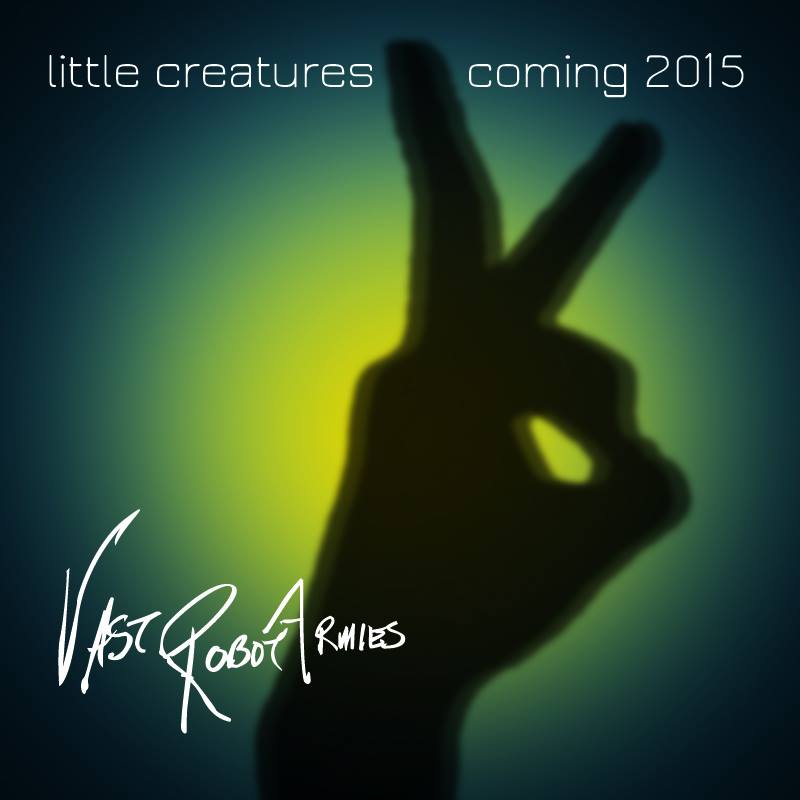 “Use the talents you possess, for the woods would be very silent if no birds sang except the best.” – Henry Van Dyke

I was anxious and excited. But there was a clarity and focus within that anxiety. I knew that no matter what, the drums were going to sound amazing. In theory, if it all went bad, we could just release an album of Chris drum tracks. Someone would buy that (me). [Me too! – Editor]

After a trip to Whole Foods to stock up on breakfast burritos and OJ, we made our way to the studio.

We arrived at Electronical at 11 am. Allen and Eric were already there setting up mics and the overall configuration of the recording room. The last time I recorded there, it was a day by day, instrument by instrument, layered affair. But days before, the guys had recorded my buddies band Sequoia in the room, with a live, everyone playing scenario. The results were great, so Allen was suggesting we try to do the same. I was apprehensive, given the fact that we had one rehearsal as a band, and it was 12 hours ago. A quick reassuring conversation later, it was decided. Live room configuration was the way to go. We hung out in the control room as Allen and Eric finished setting up.

Here are some random things about recording at Electronical. 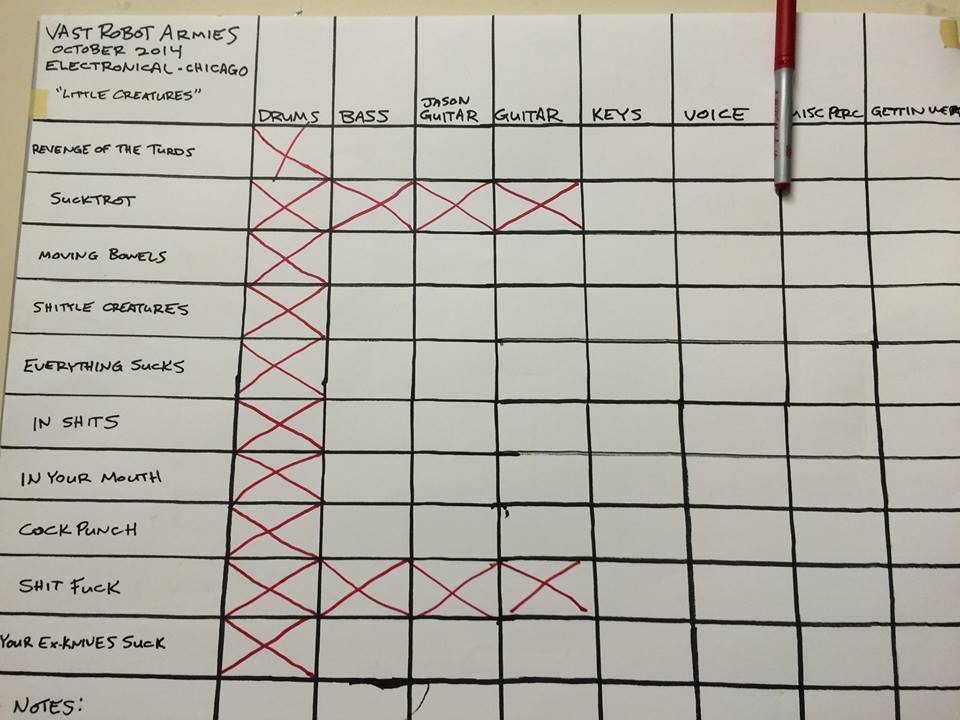 Once the Recording Room was set up, we all took our places. We decided to start with ‘Revenge for Nerds’. It had gone surprisingly well the night before, and seemed like a great place to start. It only took Chris 3 passes to get it down. We moved on to ‘In The Other room’, a driving rocker that ended up having an ‘Everybody Wants Some’ drum flavour off the top. This took only 4 passes.

We were making good time. But knowing you never utter things like that aloud, I kept silent about our progress. Joe ended up messing with that luck later on.

After in The Other Room, we went ahead with ‘Foxtrot’. In my opinion, the grooviest of our tunes (yes, I ripped the title off from the Genesis album. So what of it?) We had done three up-tempo songs, it was decided that it would be a good time to hit one of the two slower songs, ‘Moving the Needle’. By the time we got the pass we wanted, we were all famished and broke for lunch/dinner. We decided to go the The Pork Shoppe. It was a solid decision. Go there, they have enormous pickles.

There is as fine line of how long you should push before breaking for dinner while recording. You never want to disrupt the flow of someone who is in the pocket and knocking songs off the board at a great pace. At the same time, if you wait too long, and eat too late, you run the risk of creating a full belly / food coma lethargy. In this instance I think we might have waited a little too long. It was a tough decision as Chris was doing so well, we didn’t want to stop. It was 5:30 when we broke for dinner, and after the walk to and from the restaurant, and actual consumption of dinner, it was 7 when we started back up. We had 4 songs done. ‘Revenge For Nerds’, ‘In The Other Room’, ‘Foxtrot’, ‘Moving The Needle’. Thinking that the last song (‘Moving The Needle’) we did before dinner, took a bit of time, we decided that perhaps it would be a good idea to do one of the more familiar / heavier songs. ‘Mousetrap’ it was.

Now here is where it got interesting, and the unique event that was unfolding as we were making this record comes into play. As it turned out, the Kansas City Royals, a Cinderella team, made it to the World Series. The last time they had done that was in 1985. You can imagine that the fact all the people in that room for those eight days were either current residents or former residents of KCMO, made this event an even bigger deal. I am a baseball fan, and oddly enough my second favorite team is the Royals (behind the Blue Jays, of course), so I was very aware that Game One of the World Series was starting at 7:30. Allen and I had discussed this weeks before, while I was still at home in Toronto. At the time I suggested we could stream the games on my iPad as I had the MLB package. We found out that first day of recording that the package I had purchased earlier that year was now expired. So Allen went ahead and grabbed the MLB play-off package. 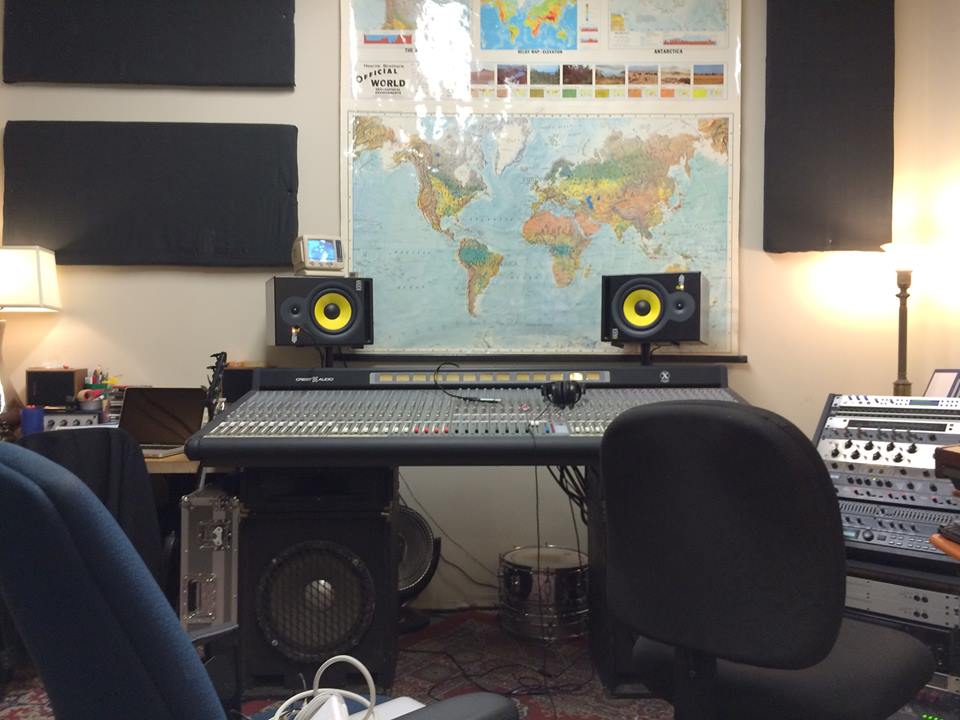 It was then during the first day of recording that I realized, and made the statement that this record’s success may very well hinge on how the World Series played out. I pointed out that if the Royals were winning, I could imagine everyone involved being in a very upbeat, motivated mood. Conversely, if they weren’t, I was fully expecting calls of “Ok, today was good enough, let’s call it…” The thought of this dichotomy and external forces at work pleased me. The idea that, whenever anyone involved here thinks of the 2014 World Series, they will ultimately have to think about making this record as well. That unique marriage of events pleased me.

So, with a laptop right in the middle of the mixing board, streaming Game One, we went into the Recording Room and proceed to work out ‘Mousetrap’. This didn’t unfold as quickly as the previous four. I chalk that up to the late dinner and subsequent food comas each of us were experiencing. I also blame Joe. As we were all walking down Electronical’s long yellow coloured hallways, he pointed out things were moving along nicely and we should have 6 songs done by the night’s end. To be fair, Joe wasn’t aware of the jinx associated with uttering definitive progress of album recording. As a result ‘Mousetrap’ took a little longer than we would have thought. It’s a fairly straight-forward song. 4/4, heavy with a soaring guitar melody line. It can be tricky to play though. As it is a very deliberate song, in its rhythm and execution.

By the time we got it, it was 8:30 and the Royals were losing to the Giants. It seemed like a good time to stop. We were all exhausted, and Chris was completely fried.

As is customary while recording at Electronical, some unwinding drinks were consumed and random iTunes songs were played. We tried not to get too upset with the baseball game result, and looked at the whiteboard with 5 recent “X”s in the drum column. There were still a lot of unfilled check boxes.

It was at this point where I started plotting the course and timeframe for the upcoming days. There were 5 songs of drums left, I figured it wouldn’t be too tricky, but was also aware that the next batch of songs was trickier. The arrangements weren’t as familiar to Chris, and the song structures were less straight forward. I had every confidence he’d be fine, but I thought after Allen & Eric mentioned it earlier to me, that other options to help communicate the arrangements to Chris, might indeed be a wise thing.

We packed up and went back to the condo.