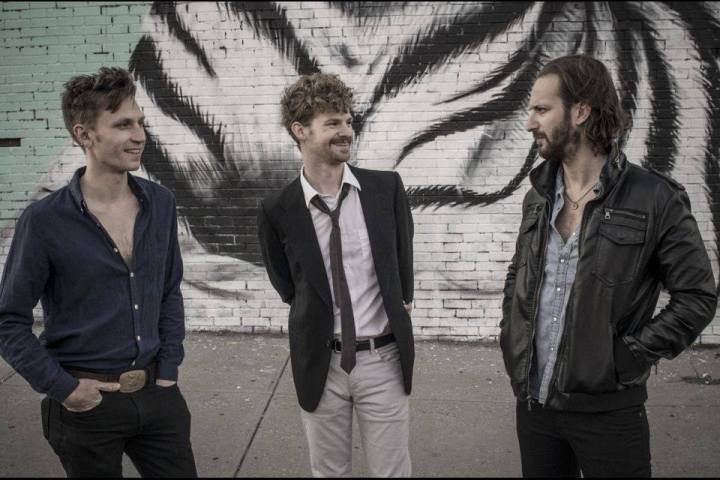 I ran into the music of Monuments a couple of years ago, thanks to that old recommendation engine Last.fm. It was hard tracking them down because there are six bands under the same name on that site (sort it out, CBS!) but eventually managed to get ahold of them, especially after listening to their latest release, Brigadune. Gabe Berezin was kind enough to take some time out from touring to answer our questions.

1.- It took a while from your first album to Brigadune, what took so long between releases?

Well, we toured a bit to support the first album, and had about an album’s worth of new material, then we hit a wall within the band. It’s tough because we were all tight friends, but we struggled to agree on what to do with the songs so we parted ways. Grant Zubritsky (bass and synth) and I remained and recruited his great friend (now my great friend) and songwriter of Lazer Cake, Robby Sinclair on drums and Robby really brought an amazing energy to the newer songs. Best time in the studio I’ve ever had, didn’t feel like work. Anyway it took two years after the last album to break up and re-form and then make Brigadune.

2.- Is there a major, encompassing theme in Brigadune?

I think I’ve probably been reading too many cosmology books. While reading about the history of the universe you’re constantly reminded what a temporary reality we live in. Not just a human’s lifetime, but the life of humanity is pretty tiny in the context of the age of the earth, or the solar system or the universe.

In our reality there’s a pedestal everyone is forced to live up to – perfect spouse, perfect family, a career trajectory, retirement, etc. Frankly, it all feels like it’s breaking down. Nothing really feels permanent to me – relationships, technology – we’re all making this stuff up as we go. Now more than ever it’s the wild west out there. That’s what songs like ‘Soon’ and ‘Guard Rail’ are about. There’s an illusion of a roadmap, but it’s hard to have faith in the people supposedly steering us through it. I know it can be a bit of a downer, but it often feels like things will crumble. And it’s not a matter of if but when.

3.- If it’s okay with you, can I ask you the story behind ‘Silver Star’ and ‘I’m here now’ from your first album?

Yeah, of course. ‘I’m Here Now’was basically the first song I wrote about surviving the 9/11 attacks. I was late for work on the 97th floor WTC1 where the first plane suicide bombed – literally right into my 4×4 cube. I faced the north side of Manhattan from where it was approaching. Would have seen it headed right for me. Everyone I knew that was up there died that day. Months later I woke up and recorded a demo in the middle of the night, and didn’t know what it was about until I listened to it a few days later. My dreams have never been the same, and the recurring one is that I’m living out something similar to the plot of Jacob’s Ladder (the movie with Tim Robbins) – basically that I did die up there and every day since 9/11 is a slow motion illusion played out during my last moments. So the song is like a reminder – I’m here now…

‘Silver Star’ is the other side of that dream, the every day aftermath. It was the impotence of that time being a New Yorker, pissed off, but you don’t have anyone within reach to be mad at, and you feel useless. All this murder and destruction happens in your back yard, and you want retribution, revenge, and you feel like an earthquake is happening inside you, but you’re not picking up a rifle and fighting. And part of that impotence is that the enemy is invisible and has no nationalism. So it’s a continual itch you can’t scratch. Since there’s nothing most civilians can do about it, you have to accept it. No ‘Silver Star’ for me.

4.- ‘You decide / We decide’ – I really like the clash of ideas so I’m also going to ask about the story behind these two.

They actually were written as one song. Grant and I and our former drummer, Mike Cook worked this up and we liked it but we didn’t know what to do when it came time to record it, so we split the song up and Grant turned the intro of the song into ‘We Decide’ – sort of a unresolved instrumental synth/guitar dirge. The main part of the song, ‘You Decide’ felt more like a math-y, poppy love song, and we liked the idea of them kind of counteracting each other. ‘You Decide’ is about two people that love each other but are wrong for each other, and neither has the courage to admit it and end it. I always saw ‘We Decide’ as the decision process and/or memorial to that relationship.

5.-Brigadune tends to mix different styles of music – How do you decide which style fits best a song? Or is it just a question of “feeling it”?

All the songs came from demos. I can’t say we’re the type of band that tries to fit a particular style. We have varied influences and they all come out in different ways. Personally I love Dave Brubeck and Prince and The Revolution, how do you combine those two? I have no idea. Usually the style of the songs dictates themselves. When I was demoing the song, ‘Brigadune’, I was listening to [Dave Brubeck‘s] ‘Blue Rondo A La Turk’ a lot, and I wanted horns to replace the harmonized guitar lines. You never know how things will seep into your mind. ‘Sole Provider’ was really Beatles-y in the chord structure because I was listening to Paul McCartney’s Ram a lot. So it’s never really a decision, you tend not to notice until you have a little distance from the songs.

6.- Lastly, I assumed in the review that Brigadune searches for an order lost amidst the chaos. Is this a good appraisal of the album’s intentions or am I way off the mark?

Yeah, that’s definitely close. I always feel like a pedantic asshole describing this stuff, but I love it. I’ve been obsessed with the laws of thermodynamics since introductory physics. The 2nd law of thermodynamics says that entropy (chaos) is always increasing. It’s the thing that determines the direction of time. The interplay of chaos and order is the thing that defines the properties and repeatable forms of the proliferating universe – life is just a lucky turn of the swirl of chaos and order. I love this as a model of writing music – being open to the randomness that happens can inform the path a song takes. I love that process. It’s manifest everywhere in nature. And it was manifest in these songs in both their structure and lyrical content.

7.- You mentioned on twitter something about music being helpful/therapeutic with mental health issues. What has been your experience?

Everybody’s got their shit. Personally, I pack mine up. When something brutal happens -a betrayal or bad luck, or some heavy thing – I swallow it, it smoulders until it eventually explodes, but only internally, so I’m not sure that’s visible to anyone else. I live alone, so working through ideas and songs in my home studio is the environment where it’s all safe to come out. That’s how the riff in ‘Soon’ came out. Other times it’s just melancholy. I did a demo a while back called ‘Longing for Lana’ about being apart from someone I loved, sitting with that palpably shitty, unavoidable pain that you’d associate with a lost limb. It was just an instrumental recorded on my phone – I was improvising over a simple loop. No thought, no planning, just expression. When I looked up, 12 minutes had passed. It’s my only form of real meditation. Not sure anyone else wants to listen to that, but for me it’s a record of exactly what I was feeling at that moment. Later it somehow became a comfort to listen back to. Something about re-digesting something bad into something new that you can control is really therapeutic.

Here’s a thing I don’t want to admit but feel compelled to. In those really pure moments of playing/writing, I find myself getting teary, which is usually how I know something is good. I’m not really a crier in every day life, but crying is important, and men aren’t usually so comfortable doing so, myself included. But if tears come out while playing, I don’t hold back, it’s usually a relief and the only time it ever really happens to me.

On a side note, crying is kind of weird – like laughter, or puking or sex, it’s a reminder that your body does these things on its own with or without your input. I’m not always so comfortable with that reality, but more often than not your body is trying to tell you something that your conscious mind isn’t aware of. My father is a psychiatrist (probably the best on the planet) and he told me once that depression is pain. And pain is an alarm telling you that something is wrong and needs fixing, not an analgesic.

Hmmm, did I answer this question?

8.- You are quite specific about your influences, so I gotta ask : Why Led Zeppelin’s III and Pearl Jam’s VS.? Which are your fondest memories of both albums?

I can’t deny classic rock influence. Those two albums are all over the place. There’s uptempo rock songs, and there’s mellow acoustic songs.

Zep was always autumn music for me, I grew up in New England, so fall is a really nostalgic season – the smell of dead leaves, the oranges and browns. ‘Gallow’s Pole’ and ‘That’s the Way’ turn me back into a 12 year old walking to school with my yellow, Sony Sports Walkman (I miss still tapes). I do a lot of solo shows and I cover ‘That’s The Way’ sometimes. I really love the John Fahey stuff Jimmy Page was into at the time and I always liked the simple idea of that song – getting older and losing childhood innocence.

I honestly can’t say I listen to Vs. much anymore, it’s a good illustration of how to do rock music with mass appeal, but with a conscience and something meaningful to say. That said, the excitement they generated after Ten was so bonkers. I think it’s still the fastest selling album ever. I was definitely one of those kids in line at Newbury Comics at midnight. Rock doesn’t quite get that kind of attention anymore. I’m still confident it will again, or I’m just a dinosaur. If so, fuck it.

A look back at Pearl Jam‘s VS.

One thought on “Interview: Monuments”