It’s probably an oft said remark that Queens Social Club seems stuck in some sort of time/space anomaly. If you ever walked in by the other door, the one that leads to the place where OAPs are happily surrounded by mustard yellow wallpaper, you’ll feel like in something out of Get Carter (or The Italian Job, if you’re more of an optimist). You will also feel a lot of glares.

But the area for gigs, it’s a strange setting; a snapshot to an England that might live more in memories than in the days of tablets and hashtags. It does fit with the live set Low displayed.

Ah, I’m getting ahead of myself. 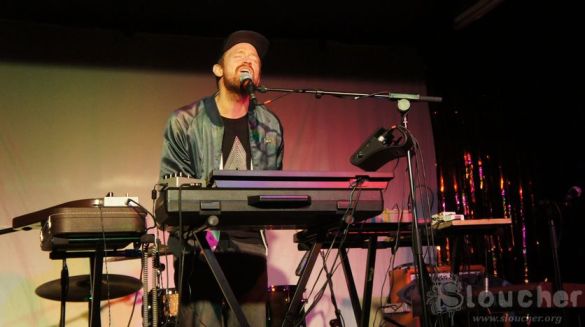 Young whippersnapper Barbarossa opened the night and his “one man orchestra” approach is a sight to behold. Vocal manipulations, a synth playing some heavy bass stuff and drum machine were a few of the tools of his set, with veered into” multitasking musician gets that cherished applause after hard work”, which really was his set in a nutshell. I’m always amazed of people who do this sort of stuff on their own. A lot of us were witness for the first time of his stuff, part melancholy, part jaunty, all in a live electronic setting. A few tracks from his upcoming Bloodlines sound very enticing, a good taster of things to come.

Now, Low were supposed to be onstage at quarter past 9, which sounds a little early for the main act, so people either anticipated a slight delay or a very long set. At 9 on the dot, a projector had a white flag reading “Hello” flailing wild in the wind, while dub music played. Alan Sparhawk came in and started tuning around 9:06, when a countdown clock appeared on stage. After the ten minute countdown was finished, all members were ready and ‘Words’ opened the night, followed by the astonishing ‘Majesty / Magic’.

While the projector had landscapes you’d see while driving the great American highways or late 50s, early 60s home videos, the band perused their catalog, with hits as recent like ‘Plastic cup’ (from this year’s The Invisible Way) to old classics like ‘Dinosaur Act’, which got a few fans show unashamedly how much they love that song (mea culpa!) I’m quite fond of ‘Just make it stop’ and it’s Americana sound and the live version is just as gorgeous as the recorded version.

Another observation: For a three member band (Eric Pollard is out doing Actual Wolf stuff), they can sure make a racket. ‘Nothing but heart’ starts very slowly but then explodes and continues to become louder. You wonder if there’s some sort of phantasmagoria, but no, it’s only three people, with a minimal and super effective drumming style that captures your primordial senses and tugs them around.

‘Monkey’ was another highlight of the night (I’m biased) and the rope a dope of ‘Dinosaur Act’ and the goosepimples-inducing ‘Pissing’ had me ready to go down into an emotional knockout. ‘Especially me’ is a great track from C’mon and it was a great choice to wrap things up, a masterfully solemn song that is like blowing a candle and seeing that “image burn” last a few seconds.

The band came back for an encore and a couple of jokes involving football (a City scarf, a quick line from John Denver‘s ‘Annie’s Song’) were quickly done while tuning was done for. That gorgeous cover of Rihanna‘s ‘Stay’ probably will go the way Ryan Adams‘ version of ‘Wonderwall’ went, that is, it’s better than the original. ‘Laser beam’ got an audience member crying loudly (I think she used my shirt as a tissue) and ‘Walk into the sea’ closed the set, again in a very emotional manner.

Low are a tricky band for some people who still think of them as slow-as-molasses music that sports the slocore tag quite well, and yes, they are, but they are also a band that has never stopped evolving and who aren’t afraid to show that raw emotions and crescendos can sometimes be much louder than any stack of amplifiers.