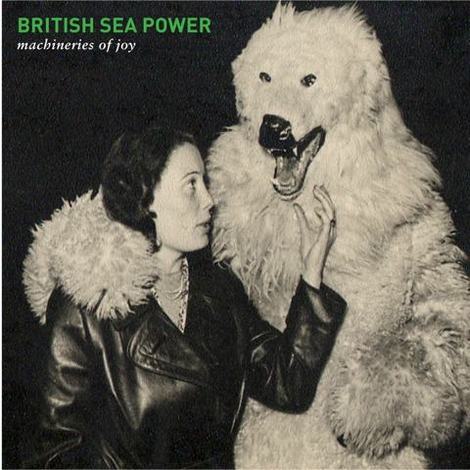 BBC Radio 6 Music listeners will be familiar with British Sea Power by now, mainly thanks ‘death by airplay’ of their newest single and title track, ‘Machineries of Joy’.

But look beyond this and British Sea Power’s latest offering is a stunning gem amidst a sea of relative folk-indie-rock mediocrity.

This album is not just one of audio pleasure, but one of beauty. The entire piece feels restrained and understated, which only merits praise. It creates a sense of style, meaning, and overall depth which masquerading emotive bands, such as the likes of Mumford & Sons, can only dream of.

‘What You Need The Most’ and ‘Spring Has Sprung’ feature some of the best minimalist orchestration heard in any contemporary recordings. Both are littered with imagery, poetic allegories, and a certain sensitivity which is lacking from a lot of similar bands.

Scott Wilkinson and Neil Hamilton’s vocals are controlled, measured, and at times appropriately strained to wring out every drop of emotion. Matthew Wood’s drumming on this album seems reserved and muted, but subtly enhances the rising melodies and reverberating echoes of Phil Summer’s horns and keyboards, and the recurring complimenting melodies of Wilkinson’s guitar and Abi Fry’s viola.

It’s rare to name check an entire band, but every member deserves a mention here. Everything is just in its right place, with every part contributing to the overall sound of ‘the team’ rather than trying to outdo one another.

With all this praise must come some criticism though, and I would suggest that the second half of this 10-track folk-indie-rock romp is slightly weaker than the first, with songs like ‘Radio Goddard’ and ‘A Light Above Ascending’ proving to be somewhat forgettable in comparison to the excellent title track and the haunting closing track ‘When a Warm Wind Blows Through The Grass.’

And it is with regret that the second track on the album, ‘K Hole’, can be described as a semi-drunken, misguided Artic Monkeys rip-off, minus the rather irritating but noticeably affectionate arrogance and angst.

Yet overall, British Sea Power provide a depth of field, sensitivity, and overall excellent which is difficult to discover among many bands. Rather bittersweetly, this probably means BBC Radio 6 Music will play the remainder of this album to death now.

The new album, Machineries of Joy, is available from 1st April, and a tour begins on 4th April.

Monsters of Sunderland
Radio Goddard
A Light Above Ascending