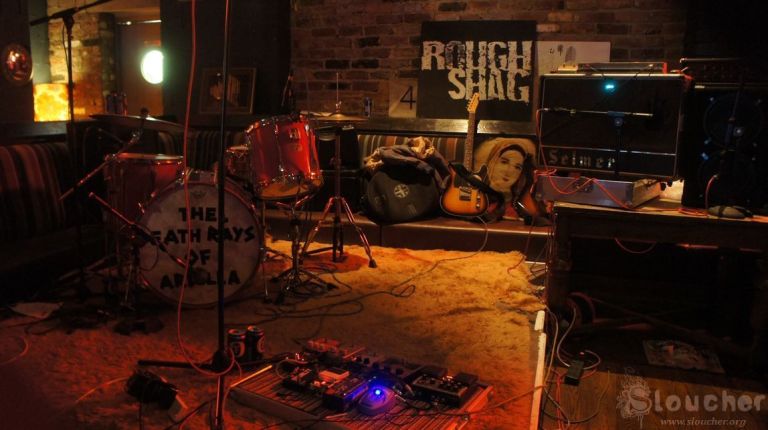 The right atmosphere was set up in Bungalows and Bears that night. The usual foot traffic of every Saturday night was treated to a mix of psychedelia, hard rock and desert rock. Yes, another Rough Shag night, full of rocking bands and vinyl records…

The mood was set just right with said records: 60s psychedelic grooves, punk, garage and the occasional Sonics track (foreboding). All the way from Vancouver, Chains of Love delivered a pummelling dose of Garage Soul, rocking out a double tambourine attack. For a few moments, it felt like a darker regeneration of B-52s (sans Fred Schneider), then for the rest of the time, it felt like wavy gravy-drenched tunes. Interestingly enough, they had their own microphones, which added a more spacey effect to the vocals.

If Chais of Love were 60s trippy, Vladimir were that moment in the early 80s that never existed, when post punk embraced goth. The darker sounds of Vladimir were intense, with deafening screams that intensified every note coming out from the speakers. ‘On my wall’ is piercing, going straight for the sweet spot in your spine. ‘I fight fire’ is sludgy AND indie at the same time. Match made in hell, welcomed with open arms that night.

It’s been ages since I’ve seen The Death Rays of Ardilla, so this was the moment I was waiting for. Releasing their double single ‘Diamonds’/’Daggers’, their set was fierce and straight to the point, with some jazzier moments courtesy of drummer Nick. It’s also been a while since I’ve heard the song ‘Death Ray’ and it has changed a bit. Enjoying those changes. An encore was achieved after the audience managed to cajole them back to the stage. The song they played? A heavy cover of The Sonics‘ ‘The Witch’. Excellent.

All around, a great show.

PS: Before The Death Rays of Ardilla took the stage, a woman and her friends asked me what they were going to play. I fumbled for an explanation and said “Desert Rock”, she tilted her head and then I said “Evil punk surf?”. I have no idea what I meant by that (judging by her befuddled look, neither did she) but she and her friends stayed for two (2) tracks, remarking that “the drummer is real good”. Then they left, so I managed to get them extra fans for a few songs, despite my inability to describe bands.