Something caught our weasel ears when we pressed play on New Beard City, the recent album by New Beard. It was the freshness of the sounds, the kaleidoscopic nature of their music and the tuba attack (of course) what made us repeat customers. After chasing them for a while (and then them chasing us…they do fight back!), we got a cool Q & A with Ben Wigler (vocals, honey-drippin’ riffs):

1) Right, let’s start from the top: why New Beard?
New Beard was a phrase that occurred to our friend and New Beard City producer Andrew Dunn. Andrew and I had a list of names that were potentially rad for the band but that one really stuck out to me for a few reasons. First, it is a little tongue-in-cheek in describing the endless cycle of ‘new beard bands’ coming and going in the indie world. Mostly though, it’s a name that implies that we’re always evolving and changing, and that we are trying to keep the experience fresh and new.

2) For the uninitiated: When and why did you decide to assemble as a band?
The band coalesced in mid-2010 when the core line-up of Tony Waldman, Ben Wigler, and TubaJoe Exley played together for the first time. Arizona had just announced an indefinite hiatus and I was eager to form a band that both genuinely fit a vision I couldn’t achieve with my first group, while also trying to legitimately shine a flood light on the fresh new talent of my new bandmates. New Beard for me is it’s own beast and I’m so lucky to be in a band with these crazy guys. I know for TubaJoe, who is a very in-demand tuba player in NYC, he loves having a rock band that he does purely for fun, and that he gets to use as a playground for some of the most righteous tuba sounds you’ve ever heard. It’s great fun for everyone. As of march of last year, we added the incredible Maria Christina Eisen (Sax for Holly Miranda) as our main harmony singer and another shredder.

3) There seems to be several kinds of musical ideas in your rather excellent album, New Beard City, with suspects Funk, Jazz and Chamber Pop in the line-up. So, influences?
Thanks for the kind words. The influences are numerous. Tony (drums) and I come from a shared love of videogame music and prog-rock, while I ventured into some indie influences such as Elliot Smith, Rachel’s, Fiery Furnaces, and Deerhoof. Tony lived in Japan for over 4 years and has lots of cultural and writing concepts from his time there. Yazan is really influenced by RL Burnside style guitar playing and singing, and he’s trying to learn throat singing and also has a strong funk background. Maria has covered the map from extreme art metal to afrobeat to indie singer songwriter. Sort of like something along the lines of Madness or Belle & Sebastian with dashes of Soundgarden.

4) How did the whole tuba came into play? It sounds so great and gives you a memorable signature sound.
Initially it was an homage to the wishes of my good friend and Arizona mega-fan Cyril Besnard, a brilliant French filmmaker. He thought that since I was trying to do something different from Arizona, which had a carefully crafted and totally cool bass guitar/upright hybrid thing, I should go with a sousaphone or something. I asked my buddy Barry Seroff if he knew any tuba players, and he forwarded me to tubajoe.com where I sat in awe while listening to TubaJoe‘s clips. I asked him if he would check out playing a gig with us, as I had demos of most of New Beard City, and we learned them in about 4 rehearsals. After that one gig, we all knew that we had the formation of a super line-up. Joe‘s unique take on low end is the farthest thing from a gimmick for us, he has a round sound with a broader frequency range, and though he can play quite percussively, Joe has an elegant way of shaping the notes and the lines that makes him both the most sonically huge but also expressive low-end instrument I’ve ever heard in a band. I feel so fortunate that he sees New Beard as a top priority in his schedule and really feels like this is “his band.”

5) Any particular memories or stories behind ‘Blood from a stone’? Easily the classiest track from New Beard City and my fave (hard choice, as the album is quite solid).
Thanks again – well I would say about ‘Blood from a Stone’ that it is a favorite live track to play, and probably the one that won TubaJoe over as a full-time member of the band, since he gets to really show the Tuba off as a huge hard-rock instrument. We’re all closet metal heads and that song in particular has some great aggressive moments. That main riff is also such a signature of the album and of the band, I won’t delude myself that it’s a ‘Smoke on the Water’ quality riff, but I think it’s a pretty good one as far as rock riffs go. 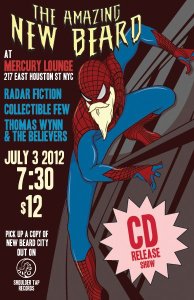 6) Who does the artwork for your gigs? I really liked the Spidey and Doom ones! The superhero drawing in your FB is pretty nifty too.
Thank you! I like those a lot too! There are many more pictures by that artist, who is the amazing Dima Drjuchin. He also did the Father John Misty cover, Bonnaroo festival poster, and a lot of stickers that are making the rounds and becoming quite helpful in bringing down the Reptilian agenda. I play in an awesome hard rock band called Corrupt Autopilot with Dima, he’s the lead singer and guitar player, I play bass, and Jonas Fields plays drums. The three of us are also the core band for comedian Greg Barris‘ Heart of Darkness comedy events. Dima is a genius. He also gave New Beard our first gig, the one that turned us into a real band. He’s one of the greatest guys you could ever meet.

7) Your previous EP, Moment of Peace, feels more down to earth than the dreamier, ornate New Beard City. What drove this change in sound?
We all love Moment of Peace. New Beard City was a hard record to make, and Moment of Peace was in a way the recording process that allowed us to transcend this clever studio record and become a real live band. Most of that album, which is recorded by the absolute genius engineer Matt Werden, was tracked live or at least with the main parts tracked live and a small peppering of overdubs. It’s a pretty good representation of what we sound like live, although now things are even more slamming because we have Maria.

8) Speaking of Moment of Peace, what would’ve done differently in that EP? Or would you just leave it as it is? (I loved ‘Jocelyn’s toothache’ and ‘Given’, btw).
I think for what it is, which was really essentially and excuse to release the video for our song ‘Given’ (the only song not recorded at the same time as the other tracks), because we were still thinking hard about the best way to try to release New Beard City. I wish maybe we had written some more new material for it, but I think you’ll see new material that sort of picks up where this one left off. Although Moment of Peace was released before New Beard City, the full-length was already mastered and in the can.

9) Any plans for physical releases? All I can see in your bandcamp is MP3s!

We do have a beautiful CD package for the album which has a gorgeous fold out poster, etc. but we have yet to set up a professional method of purchasing these online. We’re working on it. I’m considering trying to do a live version of the whole album and releasing a dual vinyl someday. :)

10) Random: Who’s got the best beard? (we might require photographic evidence – no photos of cats are allowed, although they are awesome animals)
Maria‘s got the best beard. She only wears it in practice. It’s woven together from all of the rest of our beard trimmings.

Bonus) Let’s suppose this: an alien comes to New York and tells you that if you don’t take it to the best food joint in town, it’ll disintegrate your musical equipment. Where do you take the would-be-invader to eat*? (*UFO parking space not required)
Well, since I live in a particular area of Brooklyn, I’d have to take them to one of three places if they were in a hurry. If the Alien was in the mood for pizza or any type of Italian cuisine, you’ve gotta stop by Enoteca on Court in Carrol Gardens. Seriously the best place. There’s also a great place called Le Petit Crevette – it’s where I go with my girlfriend for nearly all special occasions, and it’s the best seafood restaurant I’ve ever been to in my life. Finally, there’s Watty & Meg which has the neighborhood’s best mac’n’cheese, awesome burgers, amazing beet salad, all of which would be wonderful to slurp up through an alien feeding-tentacle.

Thank you very much! 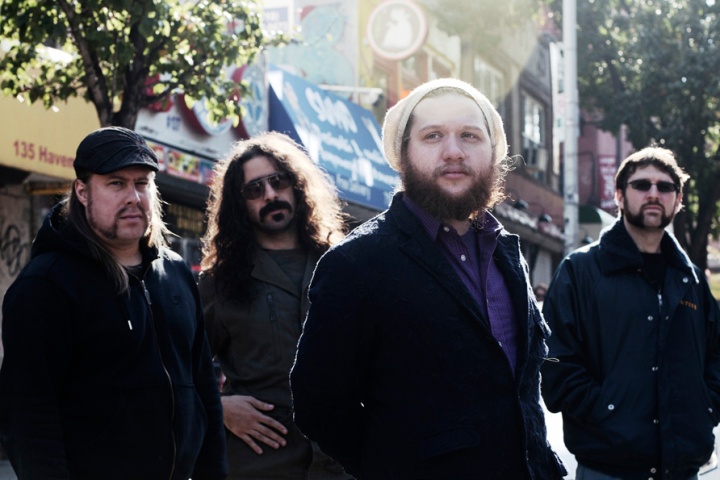 The author would like to thank Sheila Kenny, Ben Wigler and everyone at New Beard. Massive thanks to Joel Barhamand. Check out his portfolio!