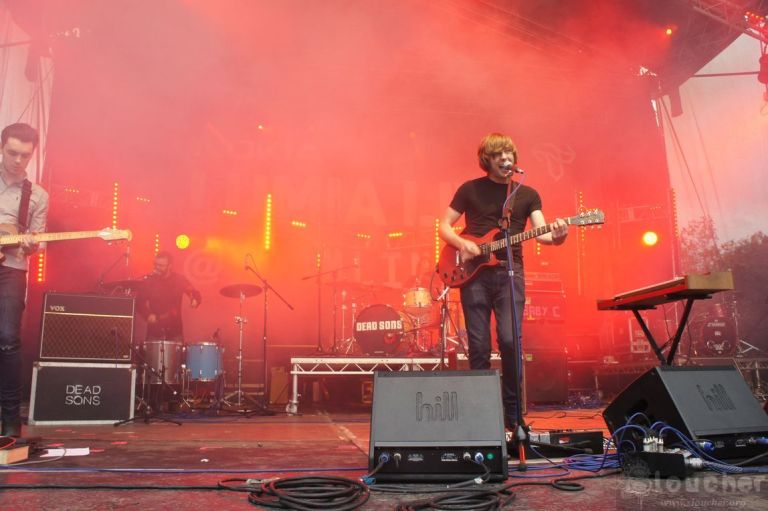 If you weren’t at Tramlines at the Main Stage on Friday at roughly 7.30pm then consider your actions carefully and read with caution; you will kick yourself.

Following a successful trip to the festival last year, one of Sheffield city’s favourite offerings at Tramlines festival, Dead Sons are a band on the brink of something spectacular. Following an intimate warm up show at the Leadmill at the ‘Tramlines People Choice Awards’ back in May, the band were ready to take a slightly damp Sheffield by storm in the great outdoors.

In the crowd ears pricked up like city foxes as the thundering drums began and the red lights glared. The fast and furious action of ‘Bangonfullturn’ brought the band right into the festival with a bigger bang than anyone could have imagined, a fantastic near-three m inutes of uninterrupted chaos. Minimal crowd interaction gave the band a mysterious air of class; no banter with these boys, business only. Which is fine by me, because they appear to have mastered the art of delivering a real rock show without any smart words of promotion or chat; just song after brilliant song. The treat that is ‘Junk Room’ provided rhythmic keys and haunting vocals that flowed perfectly together over Devonshire Green and beyond, but ‘Shotgun Woman’ really sealed the deal with its ridiculously fun chorus and perfect soundtrack for manic dancing on the greenery. The seductive lyrics of ‘Holler and The Hymns’ projected live so well, with each member of the band bringing a bit of sex and charm to the execution of, not only that song, but the entire performance. Dead Sons are indeed a sexy band. Their latest release ‘Room 54’ fed the Tramlines crowd the bands staple ingredient of edgy altruistic noise with a thumping backbeat, sure to be a winning mix on their debut album which is due later this year.

Essentially, each song played during this Main Stage slot provided a charismatic intense build up followed by a powerful loud rock ‘n’ roll explosion of insane proportions in which the crowd couldn’t help but be drawn into Dead Sons crazy dance. We’ll see you next year. Everywhere, hopefully.