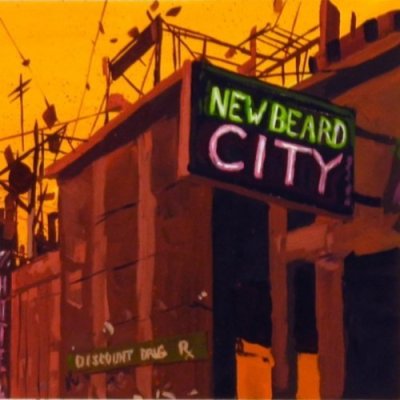 It’s a little known fact (that I just made up) that the tuba is the brass equivalent of bass. It’s a wider known fact that Ben Wigler was in Arizona and once that band met its doom, he joined forces with childhood friend (and drummer) Tony Waldman. Now, we all read those headlines about them travelling to the past in a tuned-up Maverick and came back with two more band members, a tuba and a jonesin’ for jazzy rock.

With a newly found penchant for stylish facial hair, they created a band called New Beard, released an EP last year and now, in this last of week, unleash New Beard City on us. Their super sounds of the seventies are a pleasing listen and there’s something so positive in the midst of their music that simply has to be heard.

‘Doom’ starts with a breezily paced dance between an orchestra and the tuba. The song is 100% chamber pop with a healthy dose of prog (check the guitar solo aided with a pounding drumbeat) and the best looking welcoming mat I’ve seen in a while. The beauty of orchestral arrangements (the essence of chamber pop) is how the sounds flourish, creating a recognisable atmosphere, so what reverb does to shoegaze, orchestras do to chamber pop. ‘Arizona Angels’ is as dreamy as they come, ‘Given’ has that paisley pattern down to the smallest of the fractal-like images (mandolin attack = class!) and there’s even a soothing musical interval (‘Wedding Waltz’), serving like a lemon sorbet to clear the palate.

The orchestral arrangements do take the backseat a few times. ‘My people are around’ is less populated (still some orchestral elements) but it’s extremely energetic. Heck, you get some seriously love of funk (with the tuba replacing the bass, with a dexterous performance at all times) in tracks like the superb ‘Solamente cloud’, a song that sounds like a thousand happy dreams rolled in one funky wrapping paper. ‘Blood from a stone’ continues the heavy funk attitude (via a swaggering guitar) with some dreamier sounds (chimes!). The instrumental break feels like a proper chase scene (hubcaps rolling out of the car and all!) and it’s here when New Beard has all your attention. You’d better or they will report you to the captain. And he’s too old for this shit.

There is a lot of proficiency on display here, but worry not: the band never goes into a technical self-indulgence trip (although they seem to be able to do it if they wanted) and keeps things breezy. Even in the more melancholic moments (‘A Rolling River’), there’s this suave atmosphere that taps that vein of proper Rock Pop we lost somewhere in the 70s. I’m thinking of this album sitting quite well (Long Island Ice Tea in hand) with Billy Joel’s Turnstiles or 52nd street … or even with the soundtrack of a fantastic, feel good musical like The Drowsy Chaperone.

I wouldn’t want to spoil the surprises awaiting in the last tracks, as I couldn’t write something anything other than “class”. Also: Mata Ne!!!! Domo Arigato, dear New Beard, you’ve made my day. Now, the questions: What do New Beard hide beneath their scraggly haired faces? Is it a family of birds, like Peter Griffin, or just a collection of follicles that are as free as the style of jazz they imbue in the music of New Beard City? Well, we might never know, but what’s certain is that this is stylish, fun and rocking.