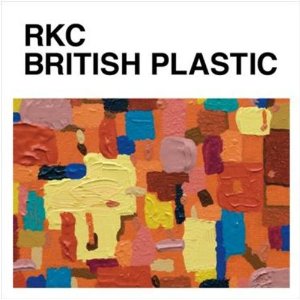 RKC (previously known as Roses King Castles) is a project by ex-Babyshambles Adam Ficek. He was known only as “that drummer dude” in 2007 when RKC started, but I reckon this third effort, British Plastic, shows he has more to offer than the line “used to work with the guy with the funny hats”.

Ficek‘s multi-instrumentalism means that although the sound is definitely indie, there are quite a few tricks of the trade backed up with different approaches. Drums, rhythm sections, programming, synths and samples, all around giving you a cornucopia of styles that never clash, just flow in rhythm effortlessly (like a good drummer should know a song should flow) .

Straight out of the bat, ‘These are the days’ is the breezy album opener. Harking a little to the Golden Era of Britpop (1997 for those wondering), the song lays out the diorama-like stylings of RKC. It’s a long song and maybe could’ve been a little leaner, but it’s a minor nitpick.

All sense of normality is abandoned right around, oh, track 2. ‘I can’t say’ mixes bits of 80s electronica, some found sounds (like water dropping in a cavern….sound effect maybe?) and a steady beat. The freakout in the midst is completely out of the blue and it is very jarring on a first visit, but can’t help revisit it. It’s like the death scene of an evil robot in a B-Movie: noisy and satisfying*.

Like the fuzzy, reverb heavy electronica we music-obsessed fans have been getting from The Big Apple, British Plastic relishes on this revival of 80s techno re-interpreted through new means (with some vintage instruments for authenticity). ‘Kittens become cats is fucking infectious and is easily the one that got me hooked (loved the echo pedal doodling) .

Mind you, there are guitar parts, but they are more little details here and there instead of being the backbone of the song, showing how RKC has denied the “indie” label three times before sunset. Never fear: ‘Seeds of Moscow’ has some cool guitar bits and album closer ‘I let go’ has a sweet, distortion heavy riff your headbanging needs.

Not exactly something you’d find seeping out of the Brooklyn scene, more like from Queens (via pints of Stella Artois), RKC offer 11 tracks of experimental electronica** (bits of trip hop too) in the form of British Plastic. Go forth and check the links and see if I’m talking bobbins (very possible).

*Sloucher.org would like to clarify that none of us condone violence towards Evil Robots. FOWWEETTZZZZ!

**I listened to Zambri after listening to RKC. That’s a good pairing.