Greetings, readers drinking styling moose earwax (decaffeinated, natch!) and nicking ginger biscuits from the recently divorced red-haired bird at the office (buy her a pint) while the boss is buying the 600 quid remaster of Achtung Baby (aka the second best U2 album, after Zooropa. Deal with it). Welcome to another edition of our “off again, off again, hey it’s on again!” single reviews column. Granted, some of them aren’t singles, but I liked them and made my stupid human collaborators review ’em. Mahalo.

This week’s singles come courtesy of Galactus and his recent addiction to vanilla Twinkies. Now, if he could only drop the planet kebab, we would all be happier and safer (but not fitter).

The Twilight Sad – Kill it in the morning

Everything is not bad news (I suppose), and here comes The Twilight Sad announcing their new album (released in February 2012). If you go to their website,  the band is giving for free ‘Kill it in the Morning’ while you wait for the new single, ‘Sick’ (out on Nov. 14th).

The band has referred to their new tunes as ‘experimental’, and ‘Kill it in the morning’ is definitely a good proof for that as it includes electronic beats, sampling, and other resources that permeate the song with rather interesting colors, more like a chiaroscuro. Darker, stronger and retro sounds float in the air; however, and just right in the middle of the song, the organic soul of the band comes back introduced through drums, to then give way to the complete and clean sound of the band.

Powerful vocals and lyrics, a combination between electronic (as a heartbeat) and organic music instruments, a balance long searched and few times achieved. I definitely can’t wait for this new album! – Tonan

The Miserable Rich – On a certain night

We all have skeletons on our closet. It seems that The Miserable Rich knows this and decided to record an album in different haunted places around Britain. That’s just asking for Slimer to mess up your gear, dudes.

Anyways, first single, ‘On a certain night’, goes for a gypsy/Americana sound. There’s longing in the voice and a very wistful violin that walks hand in hand in this lamentation. You do get the feel of a musty old place where someone lived until something happened. There’s a promise (“I’m coming / coming to hold you”) that feels will never be fulfilled. Tragic and full of sadness, it’s a nice taste of The Miserable Rich‘s album, Miss you in the days, drops out October 31th.-Sam

Deerhoof (feat. Jeff Tweedy) / The Racoonists – Behold a Racoon in the darkness 7″ 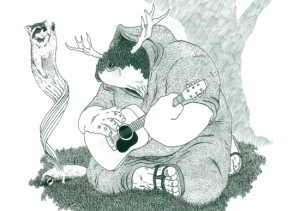 Oh dear, Deerhoof are a weird, enjoyable band, like a poodle I used to have that would nick (and chew) left socks. What’s the deal, uh? Anyway, the band has bagged the genius of Jeff Tweedy  and reworked the lovely song ‘Behold a marvel in the darkness’ into ‘Behold a Jeff Tweedy in the darkness’ (from their album Deerhoof vs Evil). With some extra guitar work from both Jeff and his son Spencer, you’ll find how an already good song transmorgrified into an excellent track. This is a marvellous match.

The other side of this 7″ comes courtesy of The Racoonists, which is a band formed by Jeff Tweedy and his sons, Spencer and Sam (good choice of name). It’s a punkier number, with a garage-like sound and attitude. This 7″ is in a limited run of punk vinyl. Hmmm, vinyl. – Sam.

Esben and the Witch – Hexagons II

It’s been a good year for Esben and the witch. Not only have they released a fantastic gem called Violet Cries (review), toured (review) and granted interviews to mere humans (us! yay!), but now they are releasing a digital only EP called Hexagons. The song ‘Hexagons II (The Flight)’ (which you can get GRATIS) is mesmerising. With a pounding electronic beat jumping through the shadows, the ghost-like voice soothes you into a false sense of security. Is it a warning? Is it a lullaby?

God/Tláloc knows. What’s a fact is that this dreamy piece is a tantalising preview of the originality and fantastic nature Esben and the witch have on their musical creations. Can’t wait for this one (Nov. 8th). –Sam

It starts like the ringtone your friendly neighbourhood chav might sport, but then it shows its indie rock teeth. It’s Miniature Dinosaurs’ ‘Alligator’, a catchy, happy pop rock song that really makes me pine for the sunnier days we had a week ago. With all this rain, I do feel like an alligator. Weird. The video is a real hoot and makes me think of primary school days, literal representations of the Bible (it was Cath school, ok?) and a dancing iguana we called Ramón.

The single also includes a remix, if that’s the sort of thing you’d prefer. It’s a dancey one but I still prefer the original. Made me tap me foot, though. -Sam.

Catch us up next week when we slate another shit band (or solo artist – Beyonce, I’m looking at you, thieving bastard). Until next time, I’m Orestes Xistos and I rule this dump. See ya and kisses and (((sholay))) (((hugs))). I just wrote that to piss off Onslaught, ’cause he’s a coward, not like our lord Tláloc (who, incidentally, is my PA). 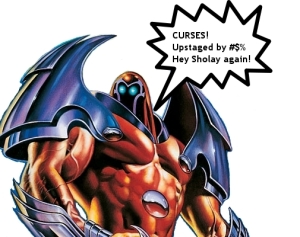 The perfect "begging face". My mother was serving dinner, this one wanted a treat #dogstagram
Morning. #volcano #popocatépetl #iztaccihuatl #cdmx
"meet me by the moontower...or what passes for one in this town."
Something refreshing.
Busy Sunday #baking #bananabread
I dunno, dude, what if there's more to life than chasing other dogs and barking? #dogstagram
Good morning Mr #zanate #wildlife
Have a wonderful weekend, lovely people. #coldweather
Gracias, Sam del pasado. #canelitas #viajeeneltiempo #paradojabootstrap