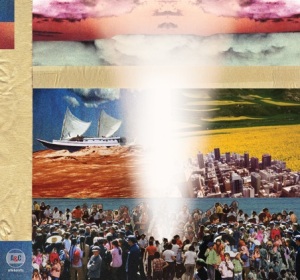 Canada’s Broken Social Scene should be described as collective of musicians rather than as a ‘band’; all the members inter-mingling and collaborating, a constant shifting of touring members, friends, lovers. It seems like Broken Social Scene can’t seem to decide what exactly it is they are – one minute they’re on, the next minute they’re off, and now they’re releasing their fourth studio record this time produced by John McIntire (Bright Eyes, Blur). It can get quite confusing if you’re not paying close enough attention…

One thing is for sure; all the members are exceptionally accomplished musicians and Forgiveness Rock Record is the perfect illustration. Of course, the record contains all the things we’ve grown to love about BSS over the years – eclectic sounds and instruments, enchanting orchestration, baroque-pop anthems, lo-fi distortion. But the new record also contains a defined sense of self as well as the sleeker production needed to incorporate the multiple layers of melody and rhythm that run through each song.

To add to the usual BSS repetoire, you also have some rather offbeat and experimental meanderings here such as the looped country-sounding acoustic guitar, hand-claps, whistling, latin percussion and ethereal vocals of ‘Highway Slipper Jam’. There is definitely more of focus on synths and electro style programming (which sees some interesting reverby effects on Kevin Drew’s vocals) which melds well with bluesy, jazzy and folk undertones.

Of note are the incredible ‘All to All’ sung by relative newcomer Lisa Lobsinger, with her ghostly voice supported by the otherworldly harmonies of Leslie Feist. The track consists of thrumming bass guitar, the twinkles of a synth and a beautiful violin arrangement.

The instrumental ‘Meet Me in The Basement’ is the ‘7/4 Shoreline’ of Forgiveness Rock Record and is possibly the definitive track on the album. With its almost hilariously catchy riffs, rolling and echoing drum fills, crashing symbols and the artful addition of trumpets and violins, it’s hard not to just play this track over and over again. I can’t wait to hear it live.

Overall, Forgiveness Rock Record takes Broken Social Scene’s diverse brand of love song and fills it out with some gifted playing, hectic instrumentation and intersecting genres teamed with the old charming and magnetic BSS we all know and love. It’s not a radical departure from previous offerings, but it is more coherent and it works well as an entire record. I forgive Broken Social Scene for whatever it is they’ve done – no hail Marys, no bunch of flowers, no rambling apologies – total and utter reconciliation.

Forgiveness Rock Record is out today! 04.05.10
Buy it from: Their official website