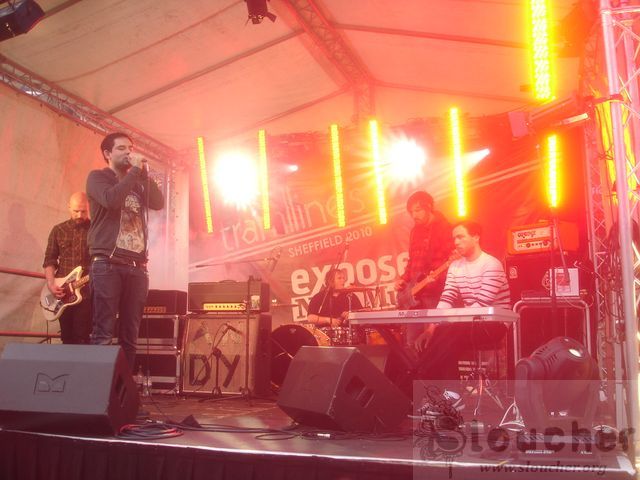 The Twilight Sad is pretty particular beast. They swagger some great music, coupled with a visual motif in most fof their albums’ artwork. After a very intense show in Tramlines 2010, I was set to interview them and, frankly, was worried about this. Some of their videos and album covers might look like a good, optimistic day in Iain Banks (!) head,  but the band are quite cheerful, if a bit nesh, but still a nice bunch. They look knackered ( I later find out they had a broken tyre on their way to Sheffield) but still ask if I’m okay to wait for them to get stuff from the stage to their van.

I meet James Graham (vocals) inside the Sheffield city hall. He’s taking some buckfast (for medicinal purposes, of course), telling me about this drink being frowned upon in Glasgow as it is assumed that only criminals drink it. I joke about the owner of a booze shop giving me “the eye” for asking for buckfast. We talk a bit before the interview, telling him that I got to know the band from their track in Saints’ Row 2. I also mention that buckfast was a cheat code in Grand Theft Auto 2 but I remember that we should be talking about music…

END_OF_DOCUMENT_TOKEN_TO_BE_REPLACED

Sunday 25: Coogan warned us about you (gushing and ranting).

Sunday was the last day and The Knackering was setting in. Going to sleep at 4 am didn’t help, but hey, S1 Artspace was worth it completely. Massive Gig attendee tip #19: for blisters try using ample shoes and painkillers.

Typing interviews and general writing shenanigans had been taxing and just missing the buskers bus with Cats:for:Peru was downright depressing. Still, soldier on.

END_OF_DOCUMENT_TOKEN_TO_BE_REPLACED

Day started out nicely with the Bromheads‘ flashmob in front of the Student Union of the University of Sheffield. A sparse but eager crowd was there, told by organisers that as soon as the band started playing, they had to freeze in position, with poses as silly as they could muster to keep for 2 minutes.

The song played was ‘Friends’ (the very one they played when they got chased out of the City Library twice in April). Afterwards it was time to take the Busker Bus, which arrived not late not early, but exactly when it was expected to arrive. After cramming everyone inside, the band haphazardly started to play ‘Friends’ again.

END_OF_DOCUMENT_TOKEN_TO_BE_REPLACED

Tramlines kickstarted on Friday with a quick visit to The Circle (for the press wristband) and then to Penelope’s (for a chat with the wonderful people from Counterfeit Magazine).  This was the first year for us covering a massive festival and needed some advice from pros to get this job done.

After an interview with the lads from The Loud (which will be posted soon on this site) in a very busy Bungalows and Bears, the first gig I went to was at The Washington. Wet Nuns lugged around some heavy amplifiers (one with the band’s name made up with pieces of the Marshall logo) and woke up the audience with ‘7 year itch’, a loud call to arms, then doing a bit of Link Wray‘s ‘Rumble’. Pretty energetic set too, and Doc and Sheriff were right in character, engaging the public with their Sheffield Alabama drawl in full gear.