It was my evening on the couch, thus I was awoke earlier than my normal 7:30am.The sounds of construction and morning rush hour traffic filled my awakening ears.

It was an exceptionally nice morning, and I was feeling great about our progress. We had 2 songs left of guitars and we plotted out knocking off 2 songs work of keyboard and piano. I decided to take a walk have some breakfast at the Golden Nugget, which was down the street from our condo. The Golden Nugget has become somewhat of a stop in for me while in Chicago. The first time I came to the city (10 years ago), my old band Sometimes Why, played with my friend’s band Grinner. We ended up spending the night and in the morning we had breakfast there before departing back to Toronto. It’s by no means anything special. In fact, it’s kinda shitty. But it’s cheap, and has a certain atmosphere. It’s like a roadside family diner in the middle of a big city. When I was recording Goodnight Myopia last year, I went there with Eric and the whole Epley Clan. So it has become something of a ritual for me when I’m in Chicago.

So that morning I decided to have my Nugget ritual. The morning routine of coffee and a wake and bake preceded my departure. Blissfully I walked down the street in a coffee and pot haze.

When I arrived to the establishment, I found a seat in a booth. The large windows looked out to one of Chicago’s bizarre 5 way intersections. They are the oddest things. You, as the driver are faced with a 5 way decision at a traffic light: Straight, Left, Right, More Right (basically NNE) or more left (NNW). After taking my seat, my surroundings within the restaurant became clearer to me. Mild panic washed over me as I realized the occupants of 4 other tables in the room with me were filled with cops. The beginnings of paranoia replaced my earlier blissful mood. I felt all eyes in the room on me (they weren’t). The waitress came and dropped off an 11 page menu. I buried my face into it and read about the multiple items that US restaurants like to “chicken fry”. That was enough of a distraction for me to sort myself out.

I still don’t understand the lure of a chicken fried steak. I’m mean, why are we breading cow? A steak is a solid thing on its own, why are people battering it? Cut it out. I quickly threw back some runny eggs and over-cooked ham and then made my way out of the cop den.

When I arrived back at the condo John and Joe were up, and right in the middle of their morning ritual: killing Call of Duty zombies. After about half an hour of that we decided it was time to take another trip to Whole Foods to refill John’s giant water bottle and get breakfast for them. I realized on our drive through the Chicago neighbourhoods, that it was the first time in days I’d seen anything other than the route to and from the studio. It was a welcome change of scenery; it reminded me a lot of neighbourhoods in Toronto. I recall John making a point of wanting to see something other than the studio, while in Chicago. I wasn’t much help. I was in the midst of doing a guitar track when he mentioned this, and I think I said something along the lines of “Ya. That’s recording for you. You go to someplace like this, and never actually see it, as you are holed up in either the studio or hotel.” I do recall John looking at me in a way that suggested my answer was not going to suffice.

After the giant water bottle was filled at Whole Foods we went to the studio. We had 2 songs of guitars left, ‘Little Creatures’ and ‘Your Ex Knife Set’. We had decided to keep the 12 string Rickenbacker for the remainder of the day. So the plan was to record the keyboard tracks for ‘Little Creatures’ and ‘Your Ex Knife Set’, and then move back to guitars and bass for those 2 songs. Then return the mighty Rick. 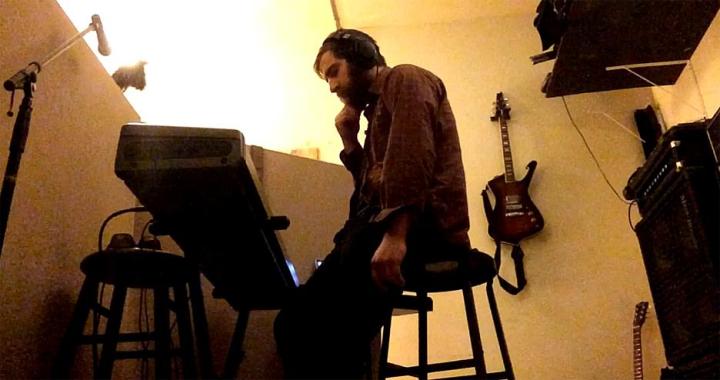 It took a bit of time to rig up Joe’s keyboard with my iPad to get the sounds we wanted to for ‘Little Creatures’. It has a very distinctive sound. Full disclosure, I recall at the time of writing it, I was listening to a lot of Doves, and they have a song (‘Cedar Room’) which I love. It wasn’t an outright cop, but it was, definitely the inspiration behind the part I ended up with. The sound I got for the keyboard when I demoed it became a big part of its character. So Joe and I fussed around that morning with all the settings and possible configurations for capturing the right keyboard sound.

Once we got the sound dialed in I began tracking it. ‘Little Creatures’ is by far our grooviest of songs. It has a shuffle feel on the drums, with a straight 4/4, relentless Jawbox’esque guitar pulse, that carries over the shuffle time of the drums. The keyboards however, meander all over the song. The left hand follows the 4/4 guitar time, with 8th notes, while the right hand introduces a melody line that dances around the passages on the 1’s and 3’s of the measure. It can be tricky to play. Being a drummer helped me get this separation of hands down.

Once I got the keyboard part down. John was able to come in lay down the bass track. I had long assumed that this would be the trickiest song for John. The bass line really carries the whole tune, and has some pull off moves on the verse that can be hard to nail down. Thinking that it would take a handful of passes I went outside to have some coffee and a cigarette. By the time I returned John had finished it (basically 8 minutes). We both laughed at the irony. Next up was Joe and all the guitars. We were pressed by a 5:00 pm deadline to get the 12 string Rickenbacker back, so we had to keep up a good pace. As Joe was tracking the guitar parts, John and I discussed the next song ‘Your Ex Knife Set’, a slow trippy number. I began a sales pitch on John. Having heard and seen him play it at his place in Kansas earlier that week, I knew he could perform it better than I could. So I told him, we’d save a lot of time if he did it. After some hesitation he agreed it would be the best course to take.

Similar to ‘Little Creatures’, ‘Your Ex Knife’ set has two distinct rhythms played simultaneously on each hand. It’s even harder than ‘Little Creatures’. John however really had a handle on this song, so he laid down the piano tracks quickly. After he finished the piano, he immediately had to pick up the bass and lay down that track. After a couple passes he had most of it down. That’s when I entered the equation, and gummed up the works. After the second chorus plays out, there is a quick bridge that moves the song into a longer coda-like passage. The bass line I had written for the coda was my favorite part of the song (unfortunately for all). It involves a bass progression that plays out over 4 bars. When John played it, he had the timing of it directly following the guitars and drums on the 2’s and 4’s. What I had laid out was something that danced over them, and played out over the entire 4 bar progression and would accent the 1’s and 3’s. This was the only song where I ended up digging my heels in. John and Eric had a hard time at first understanding what I was trying to explain. The way John played it was great, and fit. But I was trying to shape a part that was unexpected and moved the passage differently. This conversation went back and forth for about 20 mins. John was very gracious, but I think I was driving Eric crazy in trying to communicate what I was hearing. Finally the 3 of us reached a middle ground which involved John merging both ideas. After he laid it down everyone sat and listened back. Eric and John could finally hear what I was going for, and I finally understood how, the part that I had, was somewhat shoehorned into the coda. John’s sculpting of our two parts made it fit perfectly.

Joe was very patient the whole time, as he watched us debate the part. He would chime in with a mediator’s approach and helped get us all on the same page. Finally it was his turn to lay the guitars down. Again, Joe was asked to perform all the guitars for the song, and dress up the demo solos so they moved better within the songs that were taking shape in the studio. 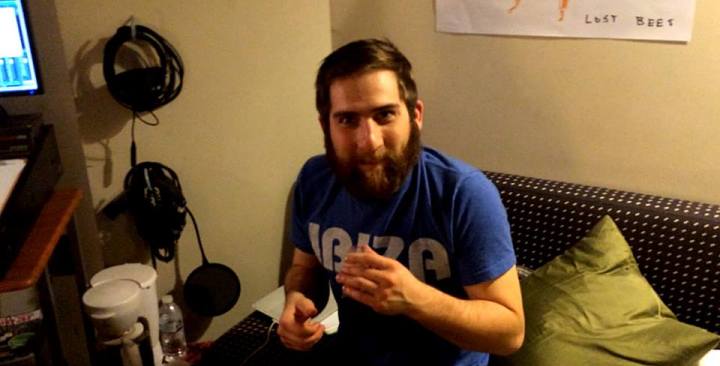 I will say, out of the many amazing moments of Joe Wells guitar playing on this record (and there are many), I found myself blown away by the soul and vibe he put into the outro solo of ‘Your Ex Knife Set’. It ended up making the whole coda.

Buy the time we finished, Joe had to race out in 5:30 pm Chicago traffic and return The Rick. So we all stopped for dinner break at that point. It was yet another burrito night. Additionally, The Royals (who may recall from previous entries here) were playing a very important game, with the Giants up 2 games to 1, the Royals needed a win. 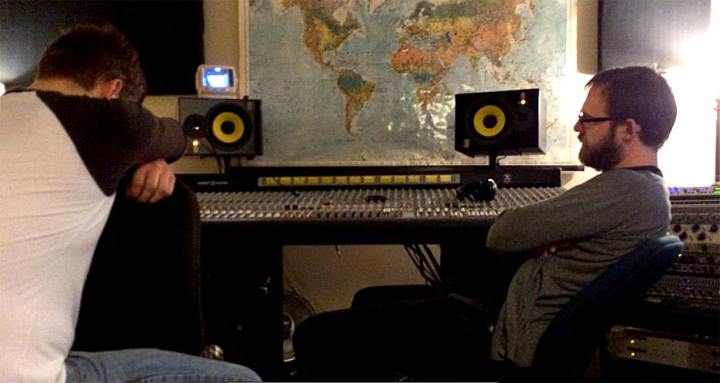 It was around 7:00 when the dinner break was over and we resumed recording. Knowing that we were all tired and the baseball game was starting, it was decided that it would be best to lay down any remaining acoustic guitar overdubs, and have a bit of an unwind, drinking whiskey and watching baseball evening. Joe was finished all the acoustic overdubs by 8, and we all moved away from the recording room and huddled around Allen’s laptop on the mixing board to watch the game.

We all proceeded to get drunk and watch baseball. It felt like the right time in the recording process to just hang out with one another, swap stories, tell jokes, and get generally sloppy. It was so much fun. I think everyone was pleased that we took a step back and just hung out that evening. We had done a lot of work in the days prior, and I’ve always thought that, the bottom line is: it’s a rock and roll record, and even though we had a schedule to follow, we needed a rock and roll night. So we dove headlong into one. It was a great night. All the bass and guitars were done, we got lit and the Royals won. 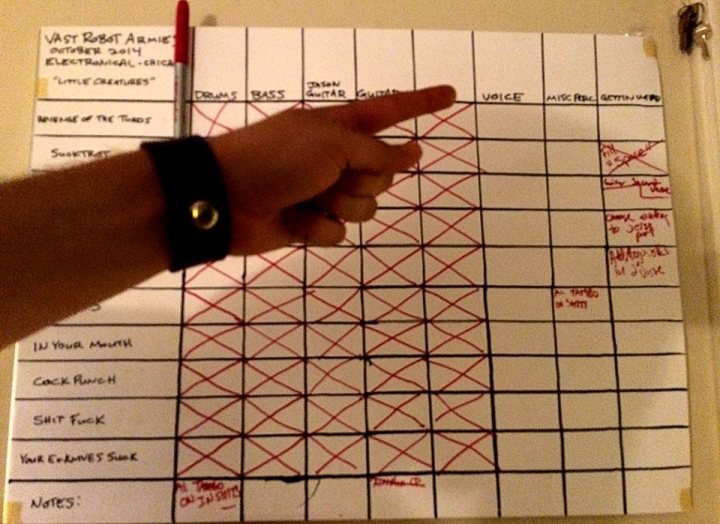 "HEY WHAT explores rugged soundscapes of doom and salvation, intertwined into a brash performance that terrifies and soothes." My review of @lowtheband For @nowthenmag
Haven't had #countchocula in five years. I always imagined #calvinandhobbes chocolate frosted sugar bombs tasted like this one.
#lasagna time
Found an old bottle of wine. Sticker says it was bought in 92. Good flavour.
This week's #mic decorations. And a sweet #daredevil poster to boot. #teachersofinstagram
My #lithosphere lecture is ready to go. #teachersofinstagram
Loading Comments...