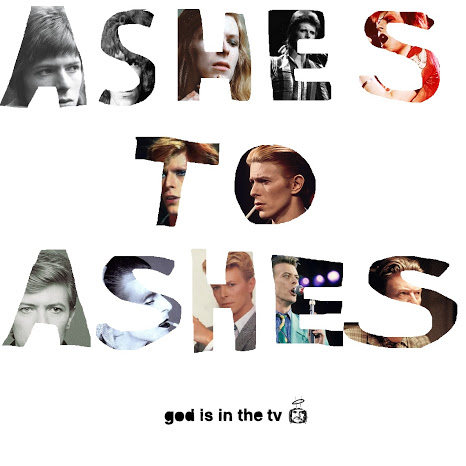 Right, I’m going to start with a dropkick: I don’t rate The Beatles. The reasons are many and I could spend a whole post about it, but I’ve noticed through the years that the bands I like best always quote David Bowie as their biggest influence.

When you look at his back catalogue, the reasons appear like horses running over the hill. If there’s one defining characteristic is that David Bowie never stuck to one genre; every album had a different flavour and colour. Heck, look at Low, one side is rock, the other one is experimental ambient stuff. Look at the great risk he took with 1.Outside (my second fave album), taking the influence of Nine Inch Nails and creating a morbid but engaging murder-mystery conceptual album. Some people said he was just following trend with Earthling (my all time fave Bowie album) but I just think he saw the massive wave Jungle was and dissected it, putting it back together in a form that he found he could control to deliver his own message (‘Seven years in Tibet’, you rock).

When Bowie waved goodbye with Reality, many people were shocked. ‘Bring me the head of the disco king’ felt like a self-reflection (and swansong) and it all seemed over until news came with a single that Bowie was back, with a full album. How he managed to keep it quiet, in this era of leaks and instant gratification-like social media? Well, fuck it, he used his magic powers, of course.

So, in celebration of his new album, The Next Day (which we’ve totally reviewed for you guys), the good people of God is in the TV went beyond the call of duty to arm this beautiful collection of covers that pay homage to The Thin White Duke.

As you’d expect, no cover sounds likes the original. If we could contact Mr. Bowie, we’d reckon he’d be happy with this. Why play it as it was without imprinting it with your own style? So, when Great Pagans make ‘The Man Who sold the world’ a slightly dream pop dirge, the regretful essence of the original still lingers, now with a powerful new bouquet.

‘Five years’, that apocalyptic track, gets pulled to the 80s, the peak of our paranoid cold war where our biggest boogeyman was the fear of a nuclear attack. Great reworking. JC Carroll‘s  cover of ‘Where are we now?’ is a strange beast, pretty much like Bowie himself. Mixing lounge, Eastern instrumentation and a delightful, sweet as honey voice, it’s a stunning moment. Totem Terrors quantize ‘Hallo Spaceboy’ and Simian Ghost do their beautiful Scandinavic spell over ‘Be my wife’, arguably the only “normal” moment in Low.

There’s a nice touch with the last track, a cover of ‘Ashes to Ashes’ by Grant Lee Phillips, one of the most underrated American musicians in history. Recorded live in a bar in Berlin, you can feel his love for the music and how the moment when this song was played, he was possessed for a few minutes and transported to an era where a music video with chroma and solarising effects changed the format of music videos forever.

As any compilation of covers, your reactions may vary and some of the covers could arguably border on sacrilege if you are a hardcore fan, but you gotta remember they are just being as chamaleonic as Bowie himself. Check this wonderful compilation and if you enjoy any of the artists, do check their tracks. I’m quite partial to Grant Lee Phillips and Simian Ghost myself and thanks to this compilation, I’m now a fan of Great Pagans and Queen Elvis.

One thought on “Various Artists – Ashes To Ashes: A Compilation of David Bowie Covers”