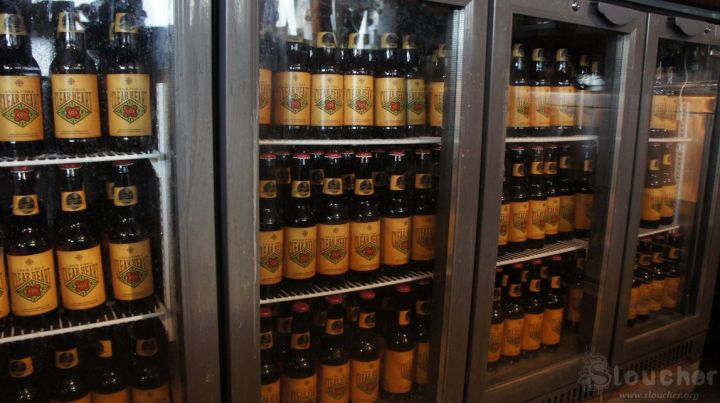 Aske Gardens is a park in that lil’ London Borough called Hackney. The park is petite sized and it reminded me of the one from the film Pi. The lonely bounce of a basketball and the odd gust of wind were the only noises on that Monday, March 19th.

A book about the system of beliefs the Aztecs had was my only company. It always surprises me that a well-researched book about my culture was written by someone not from México. Food for thought.

Once the clock stroke five, made my way to the Mary Lloyd. The neighbourhood was quiet and for a moment, it felt like the one portrayed by Diff’rent Strokes. I have no possible way of explaining the logic of that comment, just go with it.

Outside of the Mary Lloyd, speaking to a lanky guy with better hair than me is Craig Finn, lead singer of The Hold Steady. The day was the launch party of his own beer, Clear Heart, brewed by The Signature Brew Company.

Funny thing, launching a beer, but when several of your songs are odes about drinking, you know there’s some love to Bacchus’ nectar.

The Mary Lloyd was like a comfy living room. A white Vespa that I spied earlier was now safely guarded from prying hands and people looking for photo ops. Darn it.

The mood was easy going and the three fellas behind the bar were handing out bottles of Clear Heart. Pleasingly cold to the touch, the 4.5% beer was slightly bitter (but not like a stout) and was orangey/citrusey. Good body (i.e. some viscosity) and not too rough on the tastebuds. Reckon it could go well with nuclear-spicy chicken wings (i.e. broil a couple of habaneros and throw them into your wing sauce, simmering them for 20 minutes, booyah!)

I managed to get a conversation with Mr. Finn. By “managed” I mean stumble and stutter through it. He was a real nice dude, a little reserved at first, but pretty friendly after the third sentence. He mentioned the brewery offered quite a few different options (roughly 24) and he settled for the one that ended up being Clear Heart, only with a lower alcohol level so you can have as many as you want.

He asks me if I review drinks, something he probably suspects from the hill that is my girth. I do mention the website and that there are a couple of reviews of ale and food stuff. I also mention the Dark Star stout, that 10.3 % beast I had at the Rutland Arms. An “ooh” reaction is muttered and after giving him a printed copy of the zine, we shake hands.

A friend drops by; I think she was enticed by the term “free booze and gig”. She’s never heard neither The Hold Steady nor Craig Finn, so she’s looking forward to it. We do some catch-up (as in, gossip) and then it’s time for the mini-gig. 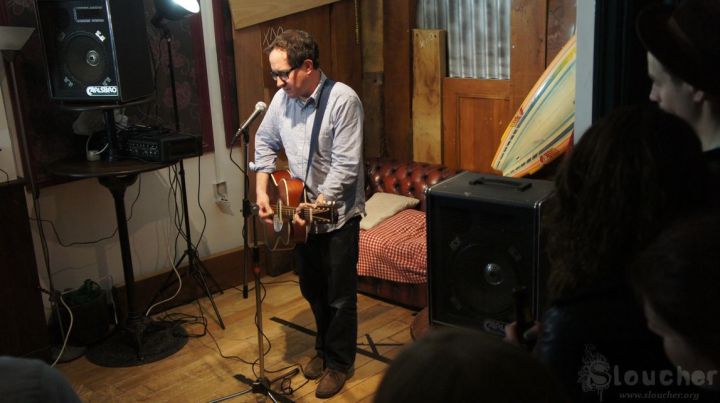 Whereas the songs in Clear Heart Full Eyes are rockier and fully instrumented, the intimate nature of the place meant that only a sparsely strummed guitar (with a lonely capo getting stage fright) would accompany Craig Finn’s voice.  ‘New friend Jesus’ is very sombre in this setting, but the funnier parts of the lyrics (“People say we suck at sports but they don’t understand, it’s hard to catch with holes right through your hands”) are more poignant this way.

Two more songs were played. One was called ‘The dudes from Saint Paul’, which was the story of a friend getting the narrator of the song in trouble. Bad people happening to good people, I guess. The last song was called ‘Going to a show’ and it was a cautionary tale about falling in love in a gig, maybe something we’ve all done at one (or several) points in our careers as word churners.

Once it was over, everyone applauded quite enthusiastically. The party continued to be vibrant, with the room full of reviewers, bon vivants, lotharios and PR people doing what they do best. A train journey back to Sheffield awaited, so I departed, quietly slipping back into the illuminated streets of old foggy… 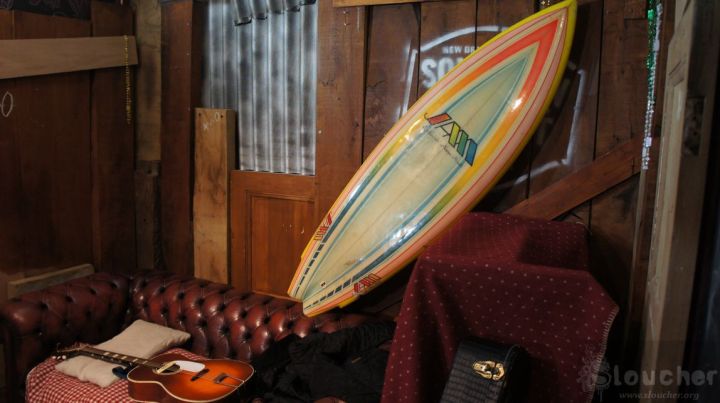