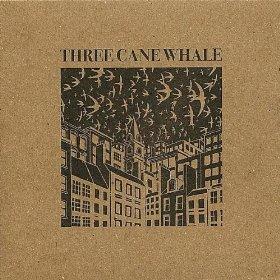 Enchanting. that is the only word in the world that I can use to describe this beautifully massive 20 track record by Three Cane Whale. The entire 20 tracks are vocal-less, but there is no sense of a missing element in this record. Horns talk almost more clearly than human voices on tracks like ‘Eggardon Hill’. I’m actually reminded of an old record I used to listen to when I was a kid called Peter and the Wolf by Russian composer Sergei Prokofiev. The record told a story that purely instrumental, yet that was also somehow easily distinguishable, even as a child. Three Cane Whale also achieve this feat, taking the listener on a journey through countrysides on ‘Dancing Ledge’, metropolitan cities of instrumental sound on Isserley and love stories seem hidden in the folds of ‘Look Up At The Sky (And Remind Yourself How Insignificant You Are)’.

This is the debut record from Three Cane Whale, who somehow create all these layers of sound with only three men total. With instruments with names like “bowed psaltery” and old off-the-wall favorites like the lyre and glockenspiel, its no wonder this album retains a certain quality of magic that few modern musicians can create. The record is being released by Idyllic Records, a small, independent UK based label that specializes in acoustic music.

From music boxes to accordions, strings galore and of course, horns, this record is like a piece of gold leaf, ready to gild the nearest ears it comes in contact with. ‘Sluice’ is one of my favorites, it fills up and then rushes out, pulsing with energy. Broken up almost distinctly into three separate parts my favorite section is the final one, marked by the entrance of a xylophone.

‘Cassiopeia’ has all the drama of the Greek mythology from which it draws its name, starting off slow and lilting and building to a height of sound and intensity that leaves off in true provocative, cliff-hanger fashion.  Delicately played, paper thin trumpets on ‘Postman’s Park’ mark the slowing of tempo toward the album’s end that, despite slowing, never loses its lovely storybook momentum.