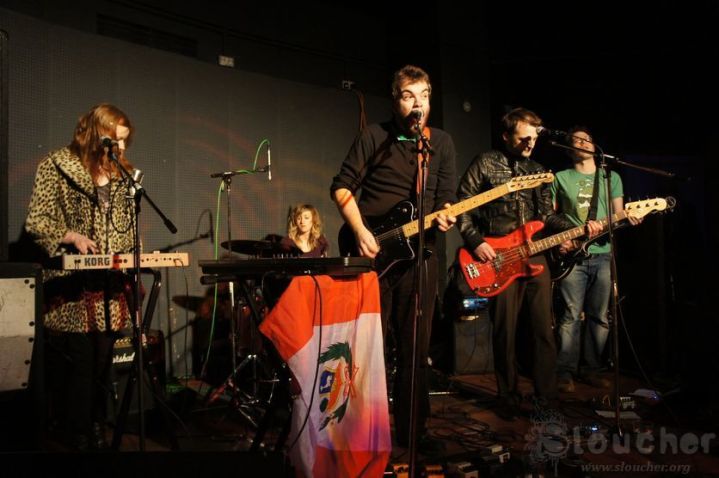 After managing to rope in an old friend to come out with me, I get to The Bowery in high spirits. I’ve been meaning to catch a Cats:For:Peru show for way too long now, so what better way to kick things off than with the launch of their new EP?

Unfortunately before the support band even starts it’s clear that this evening is going to take a turn for the unexpected. My friend (let’s just call him Sr Huevo*) is clearly on a bender tonight, having consumed a bottle of wine before even stepping foot out of his flat and thus has proceeded to buy me more pints than I could ever hope to fit inside my body.

Still, I manage to keep it together for support band Japanese Sleepers who play a delightful blend of indie and pop, and who play with vigour to the half-interested and strange crowd The Bowery tends to attract (half don’t even know there’s a band on, half are there expressly to watch the band).

Japanese Sleepers are a young group of musicians who span two cities (Nottingham and Sheffield) and clearly aren’t afraid to have a bit of fun on stage. The percussionist/violinist in particular seems to be sent in to a wild frenzy every time he goes near the cowbell which he combines with a tendency to wander off into the crowd and I must say it is highly entertaining. I get to interview these lovely people later on in the night which is where my mind starts to fall apart a bit…but more on that another time.

Next up is the wonderful Cats:For:Peru who are here to launch their new EP We Had This Problem Last Winter (Distributed via TheeSPC). I am a fan of Cats’ last album, Attack of the Pitching Machine and I can say categorically that neither the older nor the newer songs disappointed in a live setting. What I like is that although the stuff that Cats play can sound quite upbeat and almost poppy sometimes, they have some clever and grounding lyrics and more intense rocky moments during the songs which add something a bit deeper into the mix. My particular favourite was set closer ‘Fear of Better Things’ which can be found on the new EP. The song is beautiful, lyrical and a little sad but all the more memorable for it.

The band is incredibly tight live which gives the melodies and guitars a really crisp sound and I must say that lead singer Adam Follett has quite a pair of lungs on him! Even Sr Huevo in his state of physical and mental incapacity turned to me and said, “Woah!” (at least that’s what I think he said). The dude knows how to sing and can hit some pretty elevated notes – in fact the whole band have the melodies down to a tee and it’s clear that they gel well together.

Overall Cats:For:Peru give off the impression of being accomplished musicians who obviously have a lot of experience playing live because they play with real energy as well as technical skill. I think my long wait was worth it! Also, the new EP sounds great.

So after a lovely evening, I found myself sprawled out under a duvet with all my going-out clothes and a full face of make up on, a Greg’s wrapper scrumpled up on the floor next to me and Sr Huevo’s sockless feet in my face from where had passed out upside down on the sheets in only his boxers. “Eurghhgtycgjgvf” I said, “Eurghhbuhncgf” replied Sr Huevo. At least we were both still alive.

*Names have been changed to protect the identity of those involved – “Sr Huevo” is still wanted in connection with the heist of a Warburton’s Hot Cross Bun making factory back in ’84.

One thought on “Graceless ending to a lovely evening”