Someone still loves you Boris Yeltsin – Let it Sway 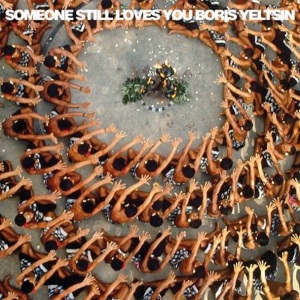 The review gushing proper: Actually, could I persuade you to get this free song before?  Take it as evidence. Or just press play before reading what follows.

There ya go. And if you like it, you can get it for free. Or listen to it on Spotify while I rant about it.

Someone still loves you Boris Yeltsin is a mostly happy band. Mostly. And this album, called Let it Sway is as happy (or at least feels like it) as they come. Maybe happy-go-lucky, maybe ignorance-is-bliss-happy but, man, it did lighten up the spirits round here.

It’s a fun album, never taking itself too seriously, it’s all about doing shenanigans: a mid song whistling (‘Back in the saddle’), random monkey noises (or might be a kookaburra in ‘All hail Dracula!’) and off kilter song names (‘Stuart gets lost dans le metro’). Mind you, the band’s musical prowess is no joke. This is an album with some serious emphasis on getting a great tune right, with the occasional rock riff being worthy of (gentle) headbanging.

What else can be said about Let it sway? ‘Banned (by the man)’ is full of la la la’s and proper power pop joyness, there’s a cheeky sweet solo in ‘In Paris’, a song with some strange ambient sounds that inevitably turns into some rodeo hoe down piece of alt-country that made me enjoy it so much I started to namedrop as many a genre as I could to hide the fact I’m at loss of words.Those little details (strange sounds, distortions like in a well worn and warped tape, electronic bleeps and buzzes) give the album an extra range, setting it up above the other indie pop bands.

Even the rockier moments (‘Critical drain’) feel like pop. It’s powerful but at the same time, mellow. This sort of contradiction is what fuels the music and lyrics of this third effort by Someone still loves you Boris Yeltsin. Even if the three last songs don’t really fly that well (‘Made to last’ sounds a little out of place, can’t put my finger on why, though, so see my rant at the end), Let it sway is a pretty solid effort

A band that sometimes gets dissed as being “another funny named band with the one song”, I sincerely hope Let it sway will make people listen to it. It has quite a few great guitar moments (the solo for ‘Evelyn’ is beautiful) and can’t say there’s a particularly bad song in the mix. Maybe it falters a little near the end (the proverbial “brick wall”?) but still is an amazing, peppy and honest album of pop, the type they don’t really make that often nowadays.

(cheap rant, skip to links if you can’t stand fanboys ranting about how things should be run…)

Okay, so the normal edition of this album ends up with ‘Made to last’, which has a very dreamy fade out that might be the saving grace of it but still doesn’t make it for an album closer. However, if you do get the version with the extra digital tracks, you get a real gem in ‘Bended’, maybe a little of a downer from the usual Someone still loves you Boris Yeltsin musical palette, but it is a real corker, with the
“ha! we fooled you!” change of pace in the middle. Okay, not so much a change (it still feels a little sad) but, it’s a sure keeper.

Hell, ‘Cardinal rules’ and ‘Tanks Jam’ hold their own pretty good and they are a trio of amazing songs and I’m beffuddled as why they aren’t on the normal album. They could very well be swapped for the other three last songs (‘Animalkind’, ‘Phantomwise’, and my whipping boy, ‘Made to last’) and the album would be stronger.

No, really, ‘Tanks Jam’ is actually a much better album closer than ‘Made to last’. I dunno if I just sound like a stupid “troo fan” trying to dictate over the band, which I hope I’m not coming across as. If so, ignore the ramblings and listen to this album, because, despite all my silly navelgazing nitpicking, it’s a happy, summery album.

—Sam (aka an overgushing idiot that can’t write for toffee)

About the author:  I love Polyvinyl. I previously ordered stuff from them and got a personalised “thank you” card from them and a candy bar from Headlights!