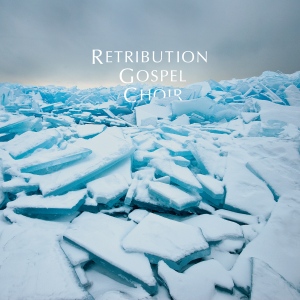 In 2008 Alan Sparhawk violently smashed up his guitar during Low’s performance at the End of the Road festival in Dorset, abruptly ending the set with what Sparhawk later attributed to a “crappy day”. Proceding that performance the singer-songwriter formed Retribution Gospel Choir, also featuring Steve Garrington of Low and Eric Pollard on drums, being the triumphant outcome and Sparhawk’s new musical outlet.

2 is the second studio full-length released by Retribution Gospel Choir and it sees the band thrashing out their demons in full force. The album is an odd mixture of straight-talking rock n’roll (check out the melodic Ryan Adams-esque ‘Workin’ Hard’), downbeat gloom, kaleidoscopic noise tinged with psychedelia, melodic intensity and abstractly religious lyrics.

The overall feeling of listening to the album is one of brooding noise. The loud, reverby guitars that saturate this record push it into the realm of an ‘experience’ rather than sounding like separate songs thrown together just for the hell of it. This is not a light-hearted album or one that requires minimal concentration – the moment it starts playing your attentional resources are consumed by the desire to penetrate the thick wall of sound and emotion coming from your stereo.

However, the album itself is relatively short and at its heart, 2 is a purely rock n’roll. ‘Electric Guitar’ is a good example of a simple guitar hook used to maximum effect as the song builds to a clattering racket of drums and blare.

‘Bless Us All’ is an ominous album closer.  Sparhawk’s lyrics and melodically haunting vocals linger in the mind and one can’t help but think that Retribution Gospel Choir are at their most affecting and evocative in these quiet moments.

2 is a strange eclectic mix of sounds but at the very least it is interesting, and at its best the album is totally absorbing.

Retribution Gospel Choir @ MySpace
PM
[Editor’s note: We can see why Sam got his ears destroyed at the band’s gig @ The Grapes this month! – Misky]

Every mosaic paints a picture
Gloomy Sunday apparitions
This week's #mic #decorations were #theninthdoctor #amazonwarrior and a cow (no, not me)
Thanks a billion, @actualwolfmusic
A square meal.
#atedemembrillo y #quesooaxaca son patrimonio universal
Loading Comments...